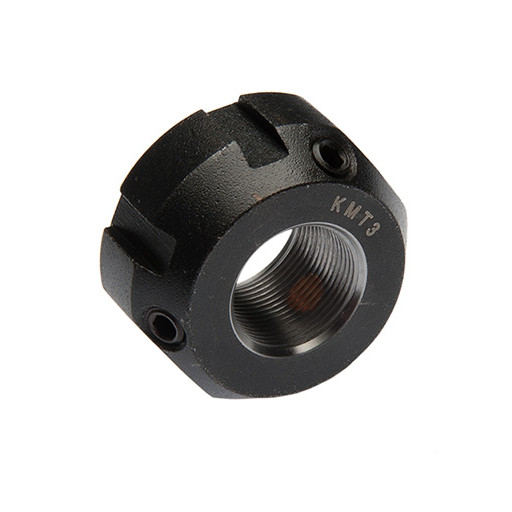 Precision locknuts, belong to the series KMT and KMTA , allow to lock  bearings axially on the shaft, in a simple and effective way.

The  locknut in question have three screws of brass arranged equidistant along the circumference. Screws (as described previously )  are pressed against the shaft by pressure screws with internal hex and prevent at the locknut to turning. Assembly and registration are easy , and are not required lock washers or grooves on the shaft.

Set and pressure screws are placed with the same inclination, with respect to the shaft axis and of  the thread side. One of the far end of screws is machined simultaneously to the thread of the locknut and therefore it is also threaded . Locknuts are locked in place thanks to the friction between the screws and the shaft thread .

The three locking screws, as described previously ,allow to position in an accurate way the locknuts perpendicularly to the shaft or they can be used to compensate some inaccuracies  or deviations of other details that need to be locked on the shaft.

Locking screws are not deformed and always retain their high precision , independently of the number of assembly and disassembly which they are subjected .

KMT locknuts differ from that of  KMTA series for external form and in some cases to the thread pitch.

Precision locknuts KMT have notches ; the smaller also have two opposite flat surfaces for use of wretches.

KMT locknuts differ from that of  KMTA series for external form and in some cases to the thread pitch. They offer the same advantages of KMT series.

They have a smooth and uniform cylindrical outer surface, their use is expected when the space turns out to be limited.

Thanks to their construction form, locknuts can be used as components of the non-contact type protections. Holes along the circumference facilitate the mounting.

KMT and KMTA precision locknuts are of high strength steel; surfaces are phosphated and oiled. For locking it is used  raw brass.

The assembling of the  precision locknuts KMT is very simple. Along the circumference there are equidistant notches. For their tightening it can use different types of spanner depending on the application and the size of the locknuts, including those in the field with square stud or percussion.

Precision locknuts KMTA can be tightened using the spanners with round stud which engage in the holes on the circumference .

To close the KMT and KMTA precision locknuts must first tighten the set screws, in such a way that the thread end of screws does not go to engage the shaft thread.

Then  screws it have to tightening themselves alternately and evenly.

When locknuts KMT and KMTA have to be disassembly screws still engage the shaft thread, even after they have the pressure screws are loose.

Light blows applied with a rubber mallet to locknut ( in proximity of pressure screw ) will be useful  to loosen the screws. Then, locknuts will be easily disassembly from the shaft.

To get more information contact us. We are ready to support you and give you the best solutions.